A Columbus office tower has been sold to the owner of Chicago’s iconic John Hancock Center.

Hearn Co. has acquired the 25-story One Columbus high-rise at 10 W. Broad St.

Financial terms of the sale by True North Management Group LLC were not disclosed.

Hearn, which owns a number of prominent skyscrapers around the country – including the John Hancock Center in Chicago – touts the 32-year-old property as being at “the epicenter of downtown Columbus,” located at the intersection of High and Broad streets and overlooking the Statehouse.

Tenants of the 407,000-square-foot building include naming rights-holder U.S. Bank, the National Federation of Independent Business and Red Capital Group, according to Columbus Business First research.

Aaron Duncan and Collin Wheeler of JLL are handling leasing for Hearn's only property in Central Ohio.

“True North always had kind of a five-year hold timeline,” Thomas told me. “They had met that, or were getting very close to that, and they had had some good success leasing the building.”

The building’s occupancy rate was in the low-70s when True North bought it in 2011, Thomas said.

“I think that the appeal to the core (central business district) is there’s lots of organic expansion with tenants,” Thomas said. “We’ve really had strong absorption, we’ve seen various buildings lease up quickly once there’s some money invested in them.”

True North had acquired the property in 2011 for $27 million, according to the Franklin County Auditor, 12 years after it changed hands for $51 million.

An industry source said this month’s sale to Hearn was for $31 million. 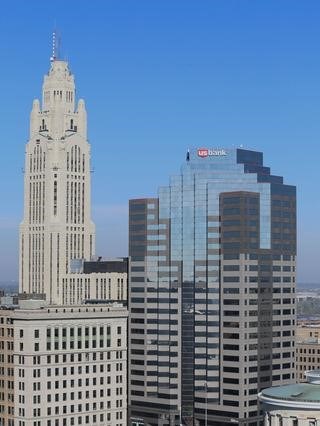