Is Hancock Tower's 'Lucent' Sculpture the New Bean? All News

MAGNIFICENT MILE — A new orb of lights in the John Hancock Center lobby is looking like Chicago's latest tourist attraction.

"Lucent," the sculpture installed last week in the skyscraper at 875 N. Michigan Ave., is already drawing looks and photos from passersby, with most of the reviews heard or overheard Tuesday sounding positive.

"It is definitely attracting tourists in the area," said Kevin Lynch, who works in the tower. "It won’t replace The Bean as a symbol of Chicago, but during the winter it will certainly be more enjoyable to visit."

Designed by Wolfgang Buttress, the semi-sphere accurately maps the stars seen from the Northern Hemisphere, with the lights even twinkling throughout the day. The lights are cast between a mirrored ceiling and a black granite pool below, suggesting a sense of infinity, Buttress said on his website.

Barbara Ro, a longtime Hyde Park resident, had never set foot in the Hancock Center, but was there Tuesday to scope out Tilt before her grandson visits. She called the lobby art a "good choice" with "subtle" features like the infinity pool.

Adults and children alike were poking the black pool to confirm the water was real. One of those kids was Faith Wombles, a Texas native who was visiting Downtown with her family. She also enjoyed the art.

The sculpture is the latest effort by Hearn Co., an owner of the Hancock's commercial areas, to add more attractions and make the Mag Mile tower more of a destination. Hearn Vice President Lindsay Hearn did not return messages seeking comment. 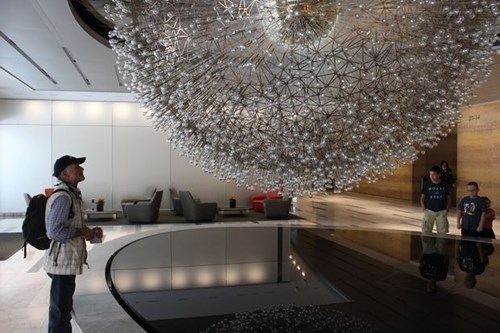