The owners of the John Hancock Center's office space and parking garage have pocketed a big chunk of cash after taking out $210 million in new debt, a refinancing that indicates the iconic property's value has soared in recent years.

A venture of Chicago-based development firm Hearn refinanced its portion of the 100-story Michigan Avenue tower with a five-year loan package from Mesa West, the Los Angeles-based lender said in a statement.

The amount of the new loan implies the property's value has risen significantly in less than three years amid extensive renovations, new leases and a rise in Chicago real estate values. As property values have risen, many investors have been able to borrow more against their buildings, pocketing much of the difference between the old and new debt.

The new Hancock Center debt carries a lower interest rate than the $145 million debt it replaced and allowed the investors to pull out some cash, said Hearn President and CEO Stephen Hearn.

“This was an interest-rate play as well as an opportunity to take some equity off the table,” he said. “I think the loan validates our program that we undertook three years ago and the value that we've added in the repositioning.”

He declined to specify the new and retired loans' interest rates but said there was a “compelling difference.”

Hearn and its partners financed the 2013 acquisition with a loan of up to $150 million from an affiliate of Hartford, Conn.-based Cornerstone Real Estate Advisers, according to Cook County property records.

Hearn declined to specify how much equity the building's owners were able to pocket in the refinance, but the amount is likely in the tens of millions of dollars. He said the investors actually borrowed $145 million on the initial loan.

The new debt, which begins with an initial funding of $195 million and will go as high as $210 million to fund new leases, replaced that debt, he said.

The Hancock's office space is almost 90 percent leased, he said. Occupancy was set to fall to about 82 percent shortly after Hearn took control, because of pending lease expirations, Crain's previously reported.

The Hearn venture has invested extensively to renovate lobbies and entrances and add a tenant lounge, new fitness and conference centers and mechanical systems, Hearn said.

Hearn's acquisition was part of a piece-by-piece selloff of the building's commercial space by the previous owner, a venture of Deutsche Bank. It sold the observatory to Paris-based Montparnasse 56 Group, broadcast antennas to Boston-based American Tower and retail and restaurant space to a venture of Newark, N.J.-based Prudential Real Estate Investors in separate deals before the deal with the Hearn venture for the offices and the parking garage.

Hearn continues to seek a sponsor that would help finance a $10 million redevelopment of the Michigan Avenue plaza outside the skyscraper, which would include a large sculpture, Hearn said. The development is likely to differ from an earlier version that would have included musicians performing inside a glass structure on the plaza, he said.

“That public space is underutilized, and that's a shame,” he said. “Redeveloping that space is an important piece for us.”

Mesa West's debt included a $35 million mezzanine loan that was sold to an undisclosed institutional investor, according to the lender's statement. Mesa West has made about $600 million in area real estate loans since opening a Chicago office last year, the firm said. 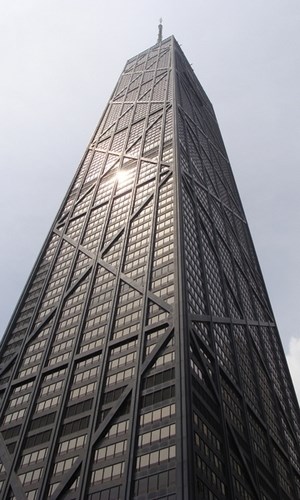